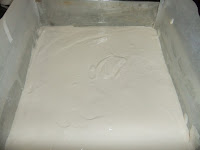 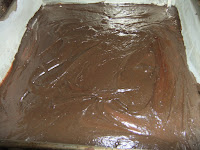 For his recent birthday Big Brother requested a chess board cake.  I had an idea in my head but wasn't sure if I could make it work... I really wanted the inside to be checkered too!  After a bit of fiddling about, here it is...

How to make a checkered cake

Big Brother and Little Sister have food allergies, so our cakes have to be gluten and dairy free.  While I just used a whole batch of batter for each layer (so four cakes) I imagine you could probably split your batter (or cut your cakes into two layers if you used gluten based cakes).


Prepare four cakes, two of each of your chosen colour.  I used white and brown.  For a chess set with 3cm squared I needed a 12 inch cake.
Because I only had one tin I used baking paper so I could quickly lift out the cooked cake and start the next one. 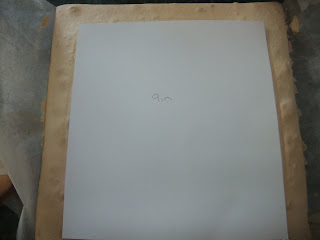 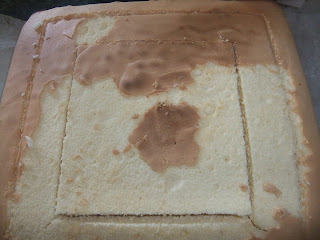 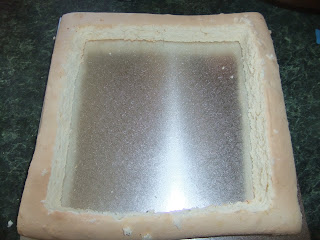 Carefully transfer the biggest square of one cake onto a tray or board.  It doesn't matter if it breaks while transferring, but it's nice if it doesn't.  I wonder if freezing would make it easier? 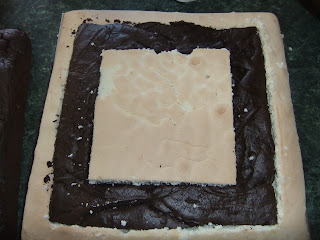 Transfer the next smallest square of the other coloured cake.  Then the smaller one of the first cake.  As you can see, I really should have had one more smaller square in there.

If you want to you could paint a sugar syrup or even some buttercream on to stick things together as you place each piece in, and between the layers. 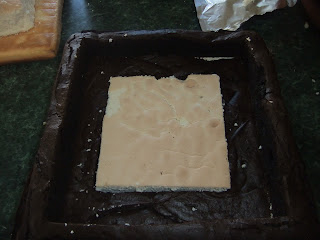 Now put the biggest piece of the cake you didn't start with last time on top of the first layer. 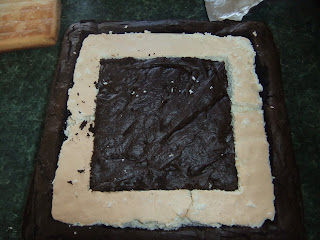 You get the idea... keep alternating colours until... 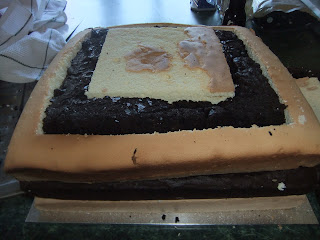 Voila!
This leaves you with one "whole cake" worth of squares left over - you could make another layer on your cake if you wanted, or keep them for later.  (Mine are in the freezer for emergency "bring cake" occasions). 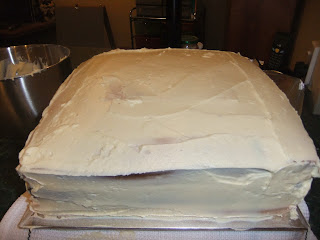 Buttercream the whole shebang.  Try not to eat too much of the left over buttercream. 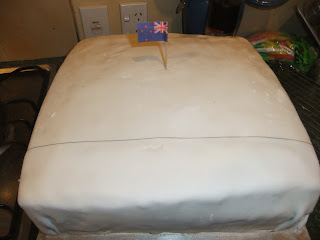 Place a layer of white fondant over the cake.  One day I'll learn how to do nice even corners and edges.
This is marshmallow fondant - take some marshmallows and a splash of water, microwave for a few seconds (20 or so) until they puff up and melt a bit.  Stir until smooth and then start adding icing sugar.  Keep adding and stirring until it starts to look like fondant.  Trust me - it looks like a terrible sticky mess for a while, but if you keep adding icing sugar, it'll get there.  You'll probably have to dump it out and knead the last of it in by hand.

Mark the centre of the cake and make a string line (to keep the squares straight). 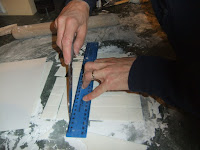 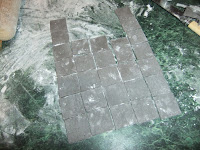 Roll out a super thin layer of fondant and measure and cut squares.  (Or in my case, get your husband to, because he's so much neater than I am) 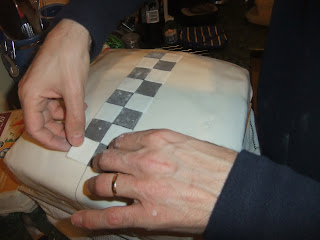 Working from the centre, lay the squares in a checkerboard pattern.  Lightly dampen the cake so they stick. 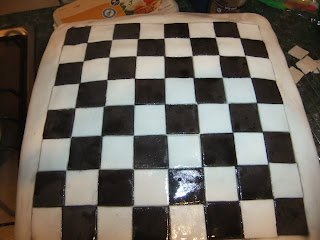 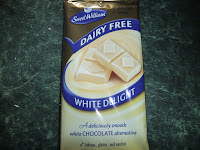 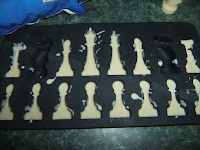 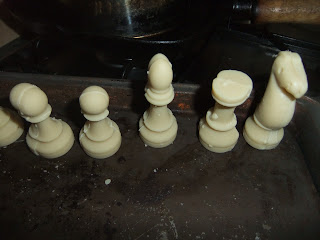 I was pleased to find this white "chocolate" which was dairy free.  It melted nicely and poured easily into my totally awesome chess ice cube trays from Think Geek with care I was able to only half fill the trays so I could join two pieces and make 3D chess pieces.  The dark chocolate was thicker and was harder to pour, so I ended up making them the full depth of the ice cube tray.  They're still cool, just not "real" chess pieces. 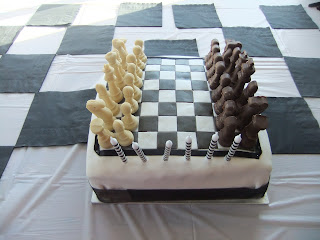 A little ribbon around the edge of the board (and the bottom too, to hide my inexpert edging), carefully place the pieces, add candles, and there it is.  A chess board cake.

All that remains is to cut it open... 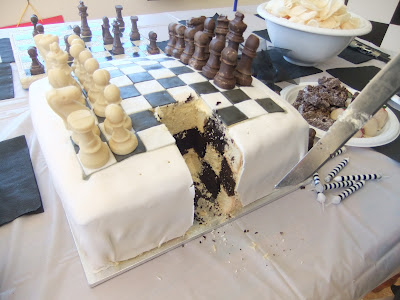