It's been too nice to do anything 'useful' - and the beginning of the school term has meant we've been so busy too, so it's nice to just hang out when we get the chance.

Little Sister is growing up very quickly now, learning new words and tricks every day and keeping us on our toes.  "Me too" is a common refrain and she does not like to miss out on anything.  She's at the point where we can usually work out most of what she's saying, but she's still largely unintelligible to other people. 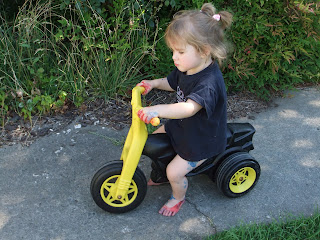 She loves her motorbike and other ride on toys.  We must get some blocks on the tricycle pedals because I think that's the only thing stopping her taking off on that.  She also loves music at the moment so she and Big Brother are off to music group on Tuesdays, much to her joy.

Big Brother is also learning lots at the moment.  He's been enjoying lots of new books, including Roald Dahl and Paddington, and has finished Miquon Red now - on with the Blue book!  He is enjoying his keyboard sessions and is counting down the days until Small Poppies starts back.  He's been doing a great job of being a big brother lately too.  I found this the other day:

He'd helped her out of her trousers and nappy and was reading her a potty story while she sat there.. too cute!

Here's a self portrait from the lad himself: 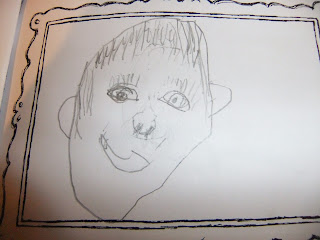 I think that's about it from us... except for my new favourite picture of the two of them together: 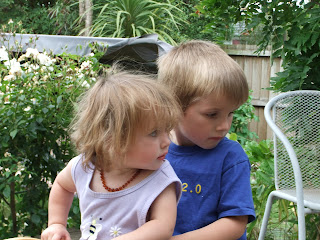