I guess things have been a little busy around here lately... and post - quake malaise sucked most of my motivation for a while.  As for that we all keep keeping on in a city that will never quite be the same again. Traffic's messed up, road surfaces are a mess and finding your way from here to there has become an exercise in map reading, knowledge of back streets and educated guesses.  But we're here, we're essentially ok, we're a heck of a lot better off than a lot of other people... and we will rebuild.

What else has been happening...

Little Sister is two!  She needed a "Numma two cake.  Red.  Wif e'mo pees mummy."  So she got one as far as my limited skills allowed (no laughing please). 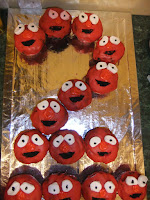 The kids liked it anyway. 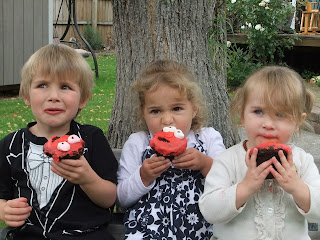 She loves Elmo, "Cookie", soft toys, dolls and tractors, knows most of her letters, numbers 1 to 10 although she can't count beyond two yet, "One, two, four, two, four, FIVE!"

Big Brother has started at a new preschool which is entirely free play, and his best friend is there.  The teachers have been briefed to avoid 'gushing' and let him do his own thing and so far so good, he's happy.  I'm not expecting it to last too much more than a term, but you never know.
He also had his first 'concert' for Yamaha Music School... unfortunately I didn't realise this was a 'take your camera to film your baby' occasion so I have no footage, but imagine 10 four to six year olds stammering their way through 4 bar compositions.  It was very cute.  For the record, BB chose to play 'Going on a Picnic' and did a lovely job.

Big Brother also had his appointment with the Educational Psychologist (the lovely Rose) who completed his WIPPSI and WIAT assessments so we have some information about where he is right now.  I'll update with the info when the report arrives, but we know he didn't ceiling on most of the WIPPSI tests (they stop around 7y4m and he was still going), which puts him beyond the 99.9th percentile for GIA.  As we expected this means that a 'normal' entry to school is really not a viable option, but Rose has opened up another option that we didn't know we had, which is early entry and accelerated placement at a school that 'does' gifted kids.  I've met with them and discussed some options, and we now have to do some thinking about what's best for him, us and them.  I'll put up the options and my thinking on them some other time.
Posted by Just Me at 9:31 PM