Big Brother and Little Sister have watched more TV than they've seen in their lives in the last two weeks.  This had led to some interesting discussions around advertising and what it means.  Both kids know ads are trying to trick them into spending money so they don't want to lose :-)

Today was the end of two weeks of Olympics.  We've learned a lot, talked a lot and enjoyed some new sports.  BB has been working out which year he'd be able to compete if he worked hard... apparently 2028 is his goal.  No idea what sport, just that that would be a good age!

BB has been working on a poster as part of his studies for the last two weeks.. here it is at last! 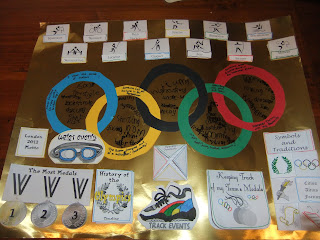 Each day he wrote in a sport he'd seen the day before.  The booklets across the top are brief descriptions of various sports.  On the rings he told me some highlights for me to record for him. 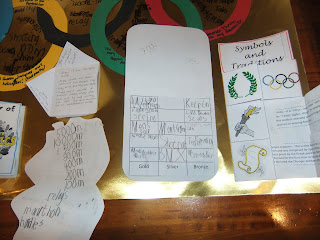 He surprised me by listing all of these track events without even really thinking about it... I didn't think he was paying attention!  He was excited to check each morning for new medals to add to add to the New Zealand medal tally.  The symbols and traditions is a pre-made cut and paste from somewhere I'll link to if I track it down again.  Up in the left corner of this photo is his summary of the opening ceremony. 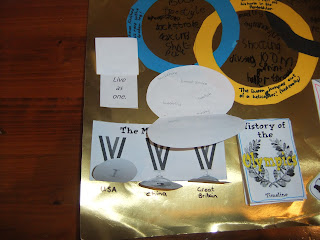 Swimming events - he listed, I recorded.  Overall medal table winners, USA, China and Great Britain, and a brief history of the Olympics in a pull out timeline.

Overall BB has taken away from this the stories of determination to do their best, and the sense of achievement and pride for the athletes who achieved to the best of their ability... regardless of final placings.  So I think he's captured the spirit of the Olympics quite well.  Roll on Rio 2016!