With the more pleasant temperatures Big Brother and Little Sister have been enjoying playing outside a lot more.  Lots of bike riding, playing in the play house (van) and lots and lots of pretending.  It's this last part that I've been watching with interest.  BB has never been much of a pretender, and he has, it's safe to say, about as much imagination as a bottle of lemonade.  The sugarfree kind.  Flat.  LS, on the other hand, "marches to the beat of a different drum".  She has her own little world going on in there... and she's dragging her brother along with her.  He doesn't do it "properly" though, and they frequently don't see eye to eye when playing "The Dog and Puppy Game", "The Secret Passage Game" or the "Getting Petrol and Going Shopping Game"... or any of the others with equally self evident names.  So I've been watching, and listening, and I think I've figured out what he's doing wrong.

It's "like" he's doing X, but he knows he's pretending.

Little Sister on the other hand, is in a metaphor... she's still very well aware that it's just 'tend, but in the moment... she just IS.

If she's a pony, eating grass in the secret passage, she's down on all fours, mouth millimetres from the grass, biting and chewing.  BB says, "NOM" and is done.

So there you go, there's my insight for the day... BB is Mr Simile and LS is Miss Metaphor... I doubt they'll ever meet on this one, but it's nice to see him trying.

In other news, LS has become a morning kindy girl.  We're giving it a go for this term, with the possibility of moving on if it doesn't work out, as I am NOT a fan of all day kindy.  Here she is on her first day... 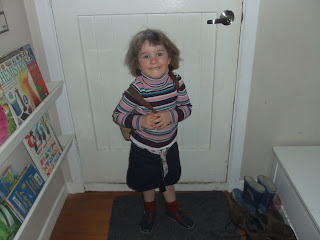